We were just blessed to have a new kid this Good Friday morning. Not a human child, but a kid. You see, we raise goats. They are beautiful, useful creatures (just look at this picture – the little guy is less than an hour old!) and it got me to thinking about Christ and Easter.

So many times at Easter we focus only on Christ as the perfect Lamb of God. It is just as important to remember Him as a goat also. Jesus was the one who bore our sins away, just as the scapegoat did on the Day of Atonement. Leviticus 16:30 says, “For on this day [Yom Kippur] shall atonement be made for you to cleanse you. You shall be clean before the Lord from all your sins.

The ritual began with the High Priest preparing himself by bathing and changing into a special set of clothes. He then selected three animals as sacrifices—two young goats and one bull. The goats each had a purpose—one as a sacrificial offering and the other as a scapegoat. The High Priest would cast lots (not unlike a roll of a die) to select one goat as the offering and the other as scapegoat . This random selection ensured that the high priest would not be able to sway the decision; God Himself would make the decision. The goat selected as an offering was killed along with the young bull. Their blood together was brought into the center, most holy place of the Temple. That sacrifice atoned for (cleansed, purified) the High Priest, the people and the sanctuary. The stage was set for the next goat, the scapegoat.

The High Priest placed both hands upon the head of the goat and confessed aloud the sins of the nation, transferring them to the goat. This casting of the sins was more than symbolic; it was ritual. As the previous goat was killed as a representative of the nation before God, this goat would carry away the sins as a representative of the nation. The goat was then brought deep into the wilderness by a trusted man and released in a barren place. Ancient Jewish tradition records that the goat would be led to a rocky place, or a place of jagged rocks to ensure the death of the goat in the wilderness.

Jewish history records that it was a common practice to tie a red strip of cloth to the scapegoat. The red stripe represented the sin of the people which was atoned for by the red blood on the mercy seat. According to the Jewish Talmuds this red stripe would eventually turn white, signaling God’s acceptance of the offering.

There is an amazing reference in the Talmuds that verifies that after Jesus was crucified, God no longer accepted the sin offering and the scapegoat offered by the Jewish high priests. The Talmuds state: “Forty years before the Temple was destroyed (30 A.D.) the chosen lot was not picked with the right hand, nor did the crimson stripe turn white, nor did the westernmost light burn; and the doors of the Temple’s Holy Place swung open by themselves, until Rabbi Yochanon ben Zakkai spoke saying: ‘O most Holy Place, why have you become disturbed? I know full well that your destiny will be destruction, for the prophet Zechariah ben Iddo has already spoken regarding you saying: ‘Open thy doors, O Lebanon, that the fire may devour the cedars’ (Zech. 11:1).’  Talmud Bavli, Yoma 39b

Christ was and is the Lamb that was slain. He was also the goat that bore our sins away. This Easter, contemplate on Leviticus 16 and Hebrews 4 and 9 and what Christ did for us. Good Friday, Lambs and Goats — what a story, what a Savior. 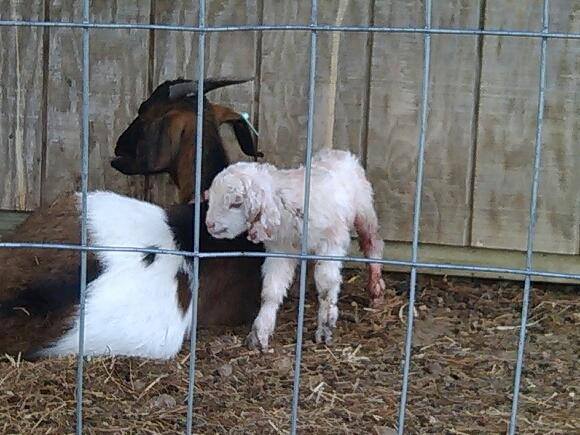